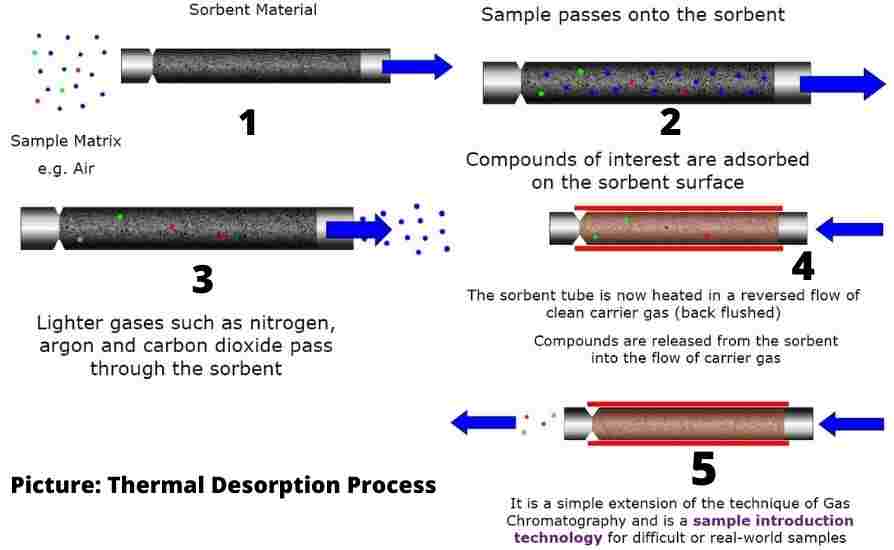 What is Thermal Desorption?

How Does Thermal Desorption Work?

Thermal desorption is used to analyze volatile (VOC) and semi-volatile (SVOC) organic compounds. A brief summary of the process is that normally there are glass or stainless steel tubes that in most cases contain sorbent materials. Samples are collected onto these tubes which are heated up in a flow of carrier gas. Any volatile (VOC) or semi-volatile (SVOC) organic compounds are released and move straight into the carrier gas stream. These extracted vapors are then selectively concentrated typically in an electrically cooled focusing trap which is then heated and compounds are released again and then injected hyper-fast into the analytical column of GC. The focusing trap or secondary trap enhances the chromatography of even the very light compounds by concentrating them.

What kinds of compounds are compatible with thermal desorption?

This is the most amazing aspect of thermal desorption. Literally, it works for everything from very volatile compounds such as acetylene to semi volatiles like 6-ring PAHs. A well-designed thermal desorption system can even accommodate very reactive species at the same time and on the same platform. However, it’s quite good to have these options but thermal desorption isn’t something like one size fits all. Thermal desorption cannot be used for most inorganic gases such as permanent gases like oxygen and nitrogen but it does work well for every organic compound that can be run through a GC. The only true exception, in this case, is non-volatile compounds (i.e. compounds that are heavier than n-C 44H90 and methane itself which is a bit too hard to trap). Other inconsistent compounds include thermally unstable compounds, didecyl phthalate, or 6-ring PAHs that boils above 525 °C.

What are the advantages of thermal desorption over other sample introduction techniques?

Thermal desorption offers lots of advantages over other GC sample preparation and introduction techniques. Some of them are the followings:

Why do some laboratories still prefer the traditional liquid extraction method?

To be honest until recently thermal desorption had the limitation of being a one-shot technique. What one-shot means is once the sample is thermally desorbed there was nothing really left to repeat the analysis.
So if there was any wrong or there is a need to try different conditions that would be really difficult and that did put people off. But all those drawbacks are things of the past because thermal desorption has seen lots of improvement over the last ten years or so. The latest thermal desorption (TD) systems allow to quantitatively recollect the split portion of TD samples enabling repeated analysis of the sample even multiple times analysis if necessary. Therefore using a single sample thermal desorption can confirm results, validate methods and carry out multiple tests.

What application ranges are covered by thermal desorption other than environmental air monitoring?

Moving away from environmental air monitoring thermal desorption is used for everything from residual solvents in pharmaceuticals and adhesive to looking at color changes in lather and taint in spice. Some of the key application areas of thermal desorption (TD) includes the following:

Read More: The Importance of Vacuum in Mass Spectroscopy

What are the most exciting recent applications of thermal desorption?

Another challenging issue is the effects of climate change on the atmosphere. Thermal desorption is used to examine how VOCs impacts atmospheric chemistry in other words the evolution of organic air pollution.

An interesting usage of thermal desorption is that it is used to analyze air bubbles trapped in different layers of ice in the Arctic and Antarctic. This application allows going back in time.

Museum conservation is an entirely different area where thermal desorption is used to analyze the chemicals released by materials of display cases. These chemicals can potentially be damaging for artifacts and artworks.

In conclusion, we can comfortably say that the thermal desorption (TD) technique is capable to perform really critical applications in diverse areas which we could not comprehend in our imagination.