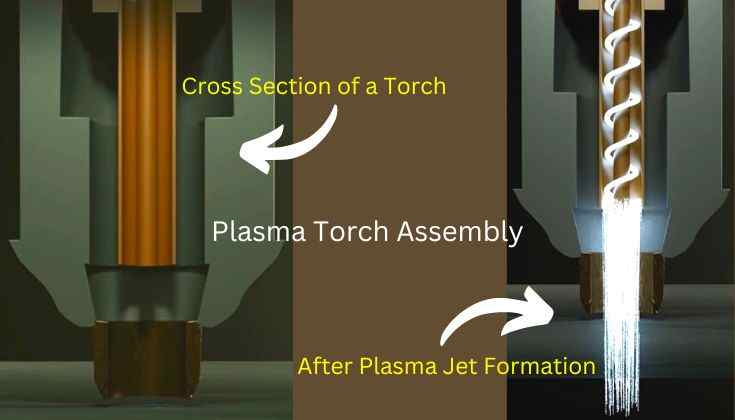 Before discussing how plasma cutters work, we are going to discuss a few things that are very fundamental to plasma cutting. By doing so, we hope to present a proper understanding of plasma cutting.

In general, the term "plasma" in physics and chemistry stands for an ionized gas. Scientists call it the fourth phase of matter apart from the solid, liquid, and gaseous states. Plasma has distinct characteristics because it carries charged particles like ions (or electrons) or both ions and electrons. Due to the presence of charged particles, plasma is electrically conductive and highly responsive to externally applied electromagnetic fields. Subjecting neutral gas to heat or an intense electromagnetic field will artificially create plasma.

Most of our visible universe is composed of plasma, including the sun and stars. Following natural phenomena are illustrations of plasma.

Neon signs and fluorescent lightings are examples of plasma applications in public domains.

What Is Plasma Cutting?

There are two types of metal cutting methods-thermal cutting and mechanical cutting. Plasma cutting is a thermal cutting process that uses ionized gas (plasma) to cut electrically conductive material. It is a melting technique that applies an accelerated jet of ionized gas or hot plasma stream on electrically conductive metal or alloy to accomplish cutting. So, plasma cutting can cut materials like aluminum, mild steel, stainless steel, alloy steel, brass, copper, cast iron, Inconel, Monel, and titanium. The plasma stream or plasma arc operates at an extremely high temperature above 20,000 degrees Celsius. It implies that plasma is hotter than the sun's surface running around 5,800 degrees Celsius. The plasma arc transfers energy to a workpiece metal which melts as a result of heat and achieves cut by dispelling the molten remains of the metal. The plasma arc develops inside a plasma torch or plasma gun before thrusting onto the workpiece material. Plasma torches can be handheld or machine-driven. Also, plasma torches have varying designs depending on the thickness of the workpiece metal.

How Do Plasma Cutters Work?

At the start, the plasma cutter forces pressurized gas through a constricted channel. It works with argon, nitrogen, oxygen, or shop air. A high-power electric spark is applied to the pressurized gas flow causing the gas to ionize. Within moments the ionized gas becomes a "plasma jet" of about 20,000 degrees Celsius and travels at about 6,100 m/sec. Plasma is electrically conductive. The plasma exits through a narrow orifice of a nozzle to the workpiece metal. When the high-speed plasma jet comes in contact with the workpiece metal, it fulfills a circuit. The circuit causes superheat energy to transfer from the plasma jet to the workpiece. Then the high-speed plasma melts the metal workpiece and cuts through it by expelling the molten metal slag. 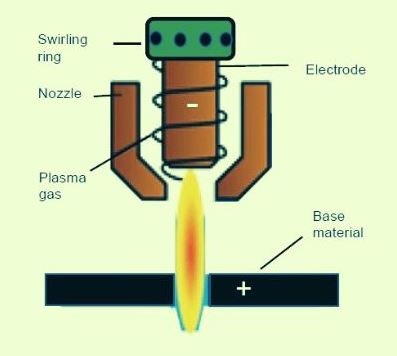 Components of a Plasma Cutter System

Power Supply - It is a DC power unit with a constant current. It converts mains AC voltage into DC voltage in the range of 200VDC to 400VDC. The power supply provides appropriate energy to trigger the plasma arc and maintains it throughout the cutting course. It tunes the output current that defines the thickness and speed of plasma cutting of a metal class.

Arc Starting Console (ASC) - The ASC is a high-frequency generating circuit that produces AC voltages of 5000 VAC to 10,000 VAC at an approximate frequency of 2 MHz. This voltage ignites high-energy sparks inside the torch ionizing the gas. The ionized gas then quickly forms into plasma. However, air plasma torches do not use high-frequency sparks. Instead, they usually use moving electrode technology to initiate a spark.

Torch Assembly - The torch has consumable parts like an electrode, nozzle, and swirl ring mounted inside in the correct arrangement. The torch holds the electrode tip in proper alignment with the orifice of the constricting nozzle. Plasma gas enters the torch by encompassing the electrode. The electric spark causing gas ionization occurs inside the torch, and the plasma exits through the nozzle orifice. An optional shield cap at the front end of the torch helps enhance the cut quality. Another function of the torch is to provide appropriate cooling of the consumables to extend their service life.

Also Read: How to Fix Common Problems with a Plasma Cutter

Plasma cutters significantly differ depending on the diverse requirement of businesses and individuals. According to usability, productivity, speed, precision, cost, and portability, plasma cutters can have the following main categories.

Plasma cutting is a low-cost substitute for other metal cutting processes like laser, oxy-acetylene, and waterjet. It can cut simple and complex shaped metal with high speed and precision. Plasma cutting is the preferred metal-cutting technique across industries, trades, and domestic works. Plasma cutting has many applications in industries like manufacturing, automotive, trailer production, pharmaceutics, construction, oil & gas, restoration, shipbuilding, agriculture maintenance, salvaging & dismantling, metal processing, metal service, welding, artworks, and many others.