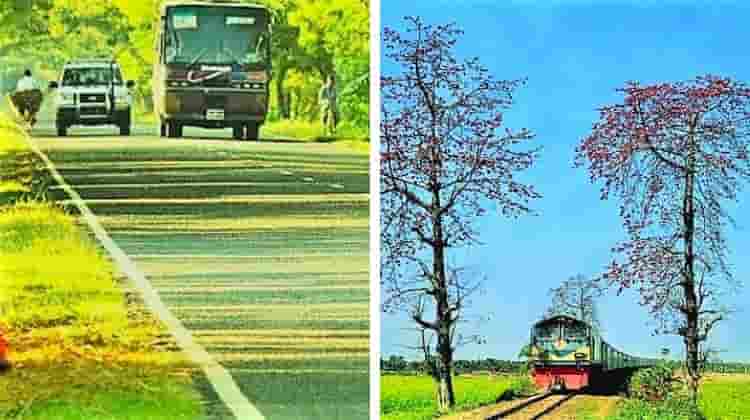 Poor show of responsibility on the part of drivers is the single most important reason behind the frequent occurrence of such horrific accidents. Being aware of conditions of the country’s road network, the driver community has to demonstrate more responsibility towards following traffic rules. Since the country has a lack of resource to properly enforce traffic rules, the driver community and also common peoples have to show restraint while driving on highways to avoid the occurrence of accidents. Introduction of provision for strict punishment against traffic rule offenders and drivers who commit accidents might discourage them to avoid reckless driving.
On the government’s part, it has to introduce modern training on traffic rules for drivers and issuance of driving license has to be brought under strict control to reduce the chance of obtaining a fake license. The government also needs to take steps to diversify the country’s transport network by expanding the railway and river transport network. Doing so will significantly reduce the huge traffic overload that the country’s road network is currently facing. Expansion and maintenance of the road network are more expensive than investing in the railway and river transport system. Investment in railway and river-way transport system development is also environment-friendly as compared to investing in the road network.

Expanding the railway network is a long-overdue necessity for the country’s communication sector. Considering the extensive population density of the country policymakers should put more focus on expanding railway networks across the country. It will save the ever-shrinking land area of the country. Investment in the railway sector is more sustainable as compared to investment in the road sector because the maintenance cost of the railway network is much less as the compared road network. Also, the Bangladesh land area, most of which is plain and homogeneous, is suitable for the development of railway which is more efficient, more reliable, less accident-prone as compared to the road transport system. The country has been suffering huge losses in both life and property due to road accidents every year. Since Bangladesh has a problem with resource constraints it should look for ways to utilize its limited resources efficiently and focusing more on the development of the railway would certainly be one of those ways. The government should also improve the management of the railway department to make it a profitable enterprise.

News of road accidents has become a prominent item of our newspapers and TV channels. Due to its almost daily appearance, newsreaders don’t even feel interested in reading news of road accidents despite being a serious national issue. Each year the country incurs a considerable amount of loss in terms of lives and property due to road accidents. Most of the accidents are caused by the reckless driving of inept and irresponsible drivers. To prevent such reckless driving authorities should move to formulate appropriate laws with provisions of stern punitive measures including fines and cancellation of driving licenses against the violators. Ways of acquiring fake driving licenses have to be blocked because it also contributes to reckless driving practice and only properly trained up drivers should be allowed to operate.

Since Bangladesh is an overpopulated country it should make an effort to expand its railway network and increase the use of its vast river network to reduce the load on the inadequate road network. Dhaka city’s road network is less than one-third of what is required for a modern city. Govt. should work to improve this condition.
Traffic congestion on roads has become one of the country’s top national problems. Bangladesh might be the only country in the world where road traffic conditions regularly reported in newspaper headlines. The estimated economic loss due to traffic congestion has been increasing day by day with tons of gallons of fuels and hundreds of working hours are spent in idle every day. If there was a comprehensive traffic management plan drawn up 20-30 years back then the country might not have to face the present terrible situation. To overcome the present traffic situation there is a need for a longer-term plan with options for adaptation to changing needs. Any short term plan will only make the situation more complex for the future which would require more money and labor to correct back.

Our railway network has not increased from what has been left by the British colonials rather in some cases its condition deteriorated due to lack of maintenance and lack of investment. Mismanagement for years has also been contributing to its poor performance. Contrary to this, considering the infrastructure left by the British, the railway had the real chance to become the country’s main transport network and it could have been achieved with much less money and labor that the country invests in road network expansion. Considering the country’s huge population density, a robust railway transport system may serve its interests in a better way.

Authorities should make all necessary efforts to avert any further delay to this so important transport project for the capital. The traffic situation of the capital has already been unbearable for many years with hundreds of new vehicles hitting the city streets every day. Further delay in implementing such a crucial transport project in the city will only contribute to a more complicated traffic scenario for the city. Since the capital city’s communication networks are much less than adequate, all the projects aimed at improving its traffic scenario have to be pursued vigorously. Hour’s long tailbacks on city streets not only increase sufferings for commuters but also results in loss of hundreds of hours in working time and in unproductive burning of imported fuel. All these factors are continuously contributing to the increasing cost of running a business in the capital resulting in day by day increase of commodity prices and thus living cost. Relieving the city from its ever-deteriorating traffic situation lies at the heart of bringing order to the city life and relieve its inhabitants from multiple challenges they had to face in their daily life.

This sounds very heartening that the Dhaka-Chittagong highway 4-lane upgrade project is going on in full swing and the communication minister is taking special care of the project. This is a long over-due project and once completed it will have a great impact on the economic activity of the country. A 4-lane Dhaka-Chittagong highway will make communication easier hence professionals and businesspeople would feel more interested to visit the port city consequently there will be an increase in inbound investment in the Chittagong region. Some other areas deserve government attention like upgrading the physical infrastructure of the port city; setting up industrial parks with provision for uninterrupted energy supply and other utility services that will make the region attractive to investors. Owing to its geographical location and having a great seaport the Chittagong region has a huge potential of becoming a hub of trade and economic activity in south Asia and south-east Asia. The responsibility rests upon the Bangladesh government to realize that potential and take some bold initiative to materialize the prospect.

During the last decade, our society has gone through a huge transformation. This has mainly become possible because of the significant improvement in the transport network throughout the country. Construction of the Jamuna Bridge on the river Jamuna has revolutionized the communication system of the country, especially of northern and north-western regions. It has increased manifold the economic activity of these regions. Bangladesh has been working hard for over a decade to construct a bridge over Padma River. Construction work of the country’s longest bridge, the second Padma Bridge on the Padma River, is expected to begin by June next year. The Padma bridge is meant to connect the country’s southern and south-western regions directly with the capital Dhaka. The expansion of the electricity coverage network has also been contributed significantly to this transformation. Rural people now a day has more access to information than that of one decade ago. Easy availability of information has made peoples more conscious about their choice.

It’s a very good initiative on the part of the government to strengthen state-run BRTC. With the addition of new buses in its fleet, BRTC will be able to help the government’s effort to improve the traffic situation in the city. At the same time, the government has to look for ways of enhancing the efficiency of BRTC. To achieve this there has to be an improvement in the management of BRTC. Scopes for pilferage and wastage of resources in BRTC have to be sealed to transform it into a profit-making corporation. Once BRTC starts to make a profit then it will be ready to expand operation on its own without renewed investment from the state coffer. It can be said that an efficient BRTC will deliver much better service to city dwellers than what it is presently doing thus helping the government’s effort in a great way to improve the traffic situation in the capital. In addition to strengthening BRTC, the government has to increase the pace of implementation of all components of the Strategic Transport Plan (STP) to rid the city from its perennial traffic problem.